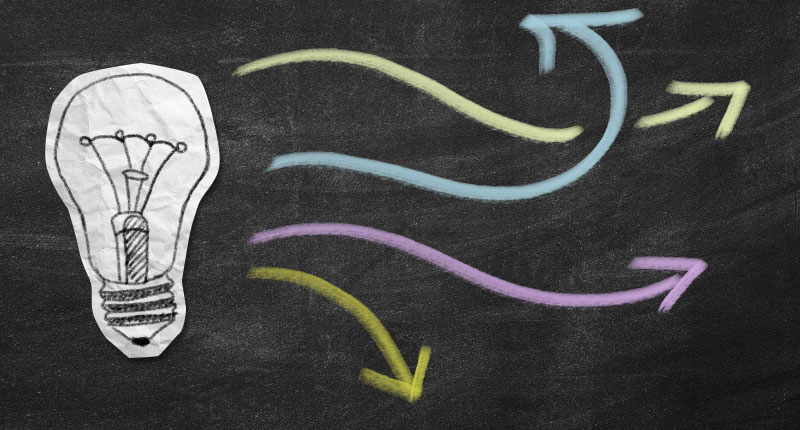 All research projects of the department

Explanations are ubiquitous in the classroom. If you ask students what distinguishes a good teacher, they typically answer: “That is someone who can explain well. In this respect, explaining can be understood as a core competence of teachers. However, explanations also play an important role outside the classroom. Giving or receiving explanations for misunderstood events and phenomena is a basic human need and the driving force behind scientific, metaphysical, and theological efforts to gain knowledge. Despite their ubiquity in the classroom, explanations are comparatively under-researched. For this reason, we have embarked on a research program in which we are investigating features and processes in the production of explanations that are conducive to learning.

The aim of this project is to investigate the effectiveness of “learning by explaining” as an instructional method for facilitating students’ learning in a sample of secondary school students in academic-track schools (social-science Gymnasium) in South Germany. We conduct a randomized-controlled experiment with 2 by 2 design (prompts: with or without; the medium of explanations: oral or written) and an additional baseline control group (restudy). The experiment will proceed in the following five phases. In the first phase (pre-test phase), all students take a pretest about the learning content (15 min). In the second phase (lecture phase), students are introduced to an important theory from Educational psychology (Cognitive Load Theory) for 30 minutes. In the third phase (learning phase), students will be randomly assigned to either a control condition in which students read the text about the learning content to restudy the material they have just learned or one of the four experimental conditions in which students will be asked to learn with an expectation that they will explain the learned concept to another peer later (learning by explaining). Among four experimental conditions, two conditions will receive “prompts” while the other two will not receive any prompts. Prompts are supposed to help students apply effective cognitive and metacognitive strategies in order to facilitate their self-regulated learning processes. In the fourth phase (revision phase), students in experimental conditions will be allowed to revise the explanations they have either written or recorded as speech in order to finalize their explanations (30 min). In the last phase (post-test phase), all students take a test on their comprehension of the learned concepts and principles (45 min). We expect that all experimental groups will perform significantly better than the control group, ensuring the effectiveness of learning by explaining methods on students’ learning outcomes. We also expect that students who receive prompts will do better on the test than those who do not receive the prompts (main effects of prompts) and that students who engage in oral explanation will perform better than those who engage in written explanation (main effect of medium). Finally, we explore the interplay between the prompts and the medium on students’ learning outcomes (interaction effect). This project will validate the findings of previous research on “journal writing” using a “learning by explaining” framework for the first time. We will discuss the similarities and differences in the effectiveness of those two established and easily-implementable instructional methods and provide suggestions for practical applications in educational institutions.

How ideas about mathematics education unconsciously influence the teacher, what kind of explanation she gives to students.

Explanations of mathematical tasks should be principle-oriented, i.e., not only the solution steps should be outlined, but the teacher should also explain why a certain solution step is necessary. Such principle-based explanations make it easier for students to understand the deeper meaning of the solution steps and thus to acquire flexibly applicable mathematics knowledge. Now, however, the TIMSS video study on mathematics education has provided evidence that teachers, contrary to their initial intention, increasingly explain procedurally rather than principally during the course of a mathematics lesson, i.e., they limit themselves to merely conveying solution steps without discussing the why. Our hypothesis is that a teacher’s intention in explaining can easily be modified by influences of the teaching situation, for example, when students signal disinterest or overload with respect to a deep engagement with the subject matter. Such influences can even work unconsciously, i.e. the teacher does not even realize that he/she can be influenced by the classroom situation and the students’ behavior. To test this influenceability hypothesis, we conduct experiments in which we attempt to evoke a procedural or principled way of thinking about mathematics teaching in teachers. The experiments conducted so far show that the particular way of thinking suggested does indeed influence action, i.e., teachers give more procedural or more principled explanations without being aware of it. In further studies, we will now try to replicate these findings from the laboratory in classroom situations under realistic conditions.

Funding: own funds as well as Federal Ministry of Education and Research (BMBF) within the framework of the doctoral program CURIOUS (Curriculum, Instruction and Learning Process) as part of the Freiburg project in the Quality Offensive Teacher Education (Spokespersons: Prof. Matthias Nückles and Prof. Timo Leuders) 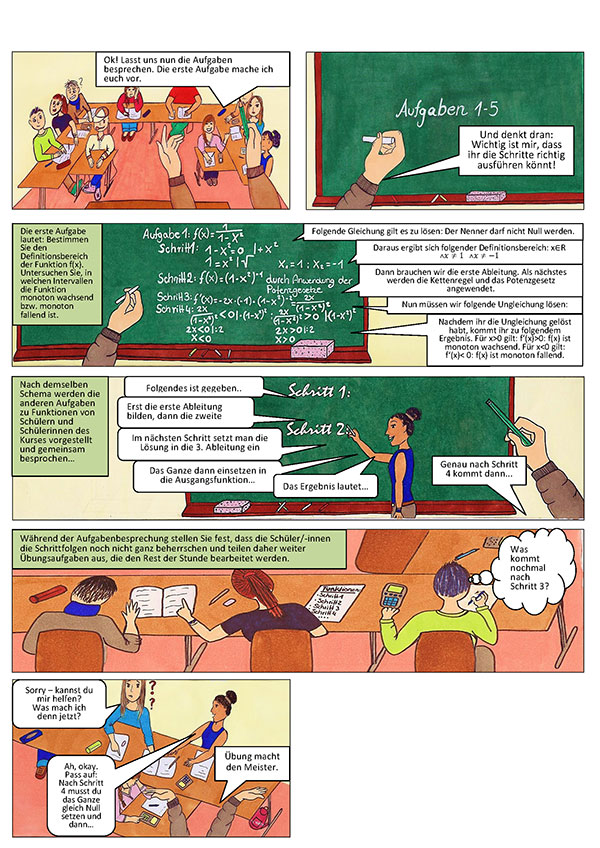 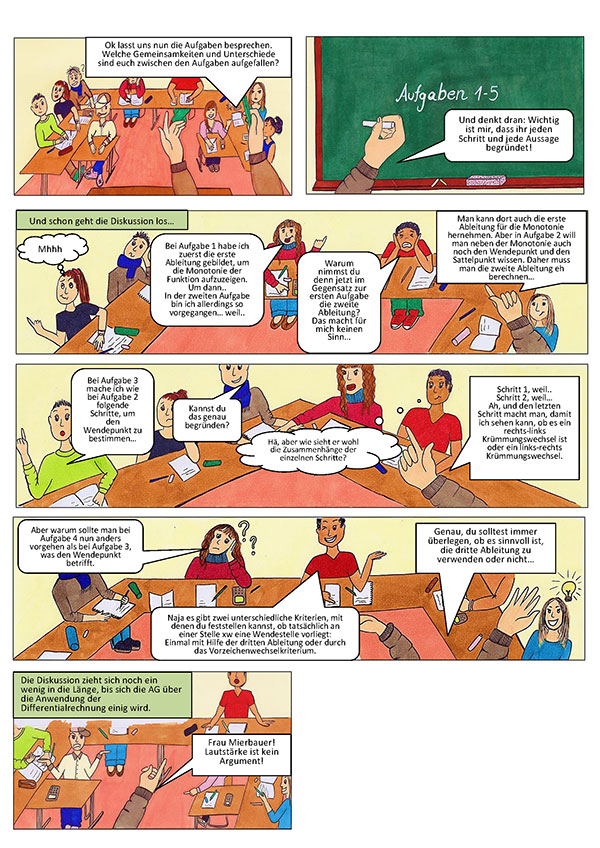 The ability to communicate the specialized knowledge acquired during studies to others is required of university graduates in many professions today. However, formulating understandable explanations is difficult for most students – as novices in formulating explanations – and therefore requires a lot of practice. A major difficulty in writing is establishing cohesion, i.e., the ability to formulate in such a way that it is easy for readers without special prior knowledge to connect the meanings of the individual sentences and to recognize a common thread in the text. Based on expert novice studies in medicine, we developed the web-based feedback tool CohViz, which provides writers with automated feedback on the cohesion of their self-written texts and makes cohesion gaps graphically visible. In several experiments, we were able to show that CohViz feedback helps students to improve the cohesion and, at the same time, the comprehensibility of the explanations they write on technical topics. Our current research on CohViz addresses the questions of how validly and reliably CohViz captures the linguistic text feature cohesion and how instructional measures, for example spatial integration or signaling techniques, promote specific components of text cohesion.

Funding: own funds, funding of the state of Baden-Württemberg within the framework of the funding line “Teacher Education in Baden-Württemberg”, as well as funding by the Scientific Society Freiburg 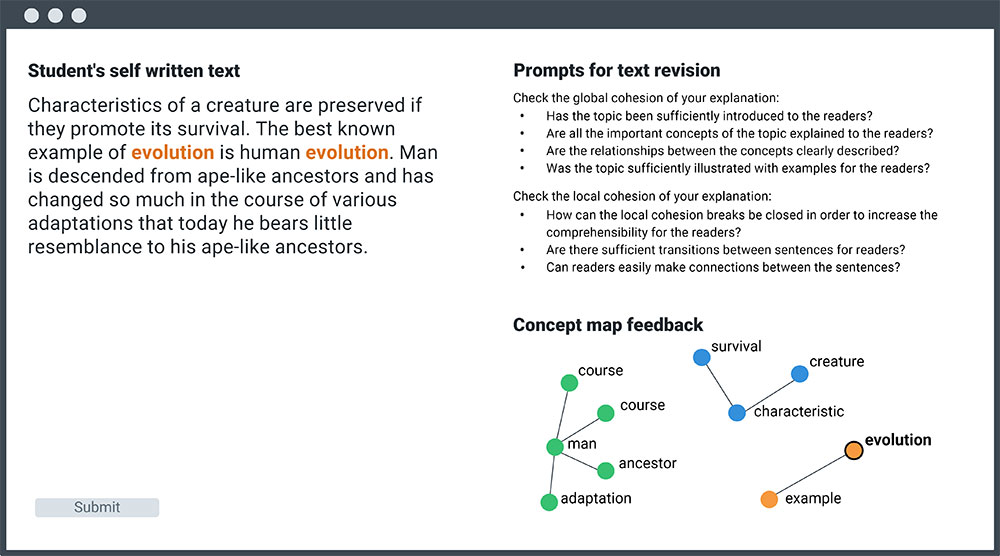